This is the one-stop Visual Basic 2010 tutorial and resuorce centre. The tutorial is written in plain language to enable everyone masters Visual Basic 2010 programming effortlessly. Visual Basic Express 2010 is the version of Visual Basic launched by Microsoft in 2010.In addition, we also run tutorials on Excel VBA, JavaScript, JQuery, CSS, HTML ,and Blockchain. 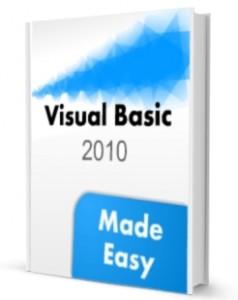 The Tutor and webmaster of this online tutorial, Dr.Liew Voon Kiong , holds a Bachelor Degree in Mathematics, a Master Degree in Management and a Doctoral Degree in Business Administration. He obtained the DBA  degree from the University of South Australia.

He has been involved in programming for more than years. He created the popular online Visual Basic Tutorial  in 1996 and since then the web site has attracted millions of visitors .It is the top-ranked Visual Basic tutorial website in many search engines including Google. He has also written a few Visual Basic related books. One of the books, Visual Basic 6 Made Easy was published by Creativespace.com, an Amazon.com publisher.