The timer is a useful control in Visual Basic 2013. It can be used to write code for events that are time-related. For example, you can use the timer to create a clock, a stopwatch, a dice, an animated application and more. The timer is a hidden control at runtime, like the engine of an automobile. We shall illustrate the usage of timer using a few examples.

To create the clock, first of all, start a new project in Visual Basic 2013 Express and select a new Windows Application. You can give the project any name you wish, but we will name it MyClock. Change the text of the Form1 to MyClock in the properties window.

Now, you are ready for the coding. Actually, you would be surprised that what you need to create a clock is only a one-line code, that is:

*TimeOfDay() is a Visual Basic 2013 function that returns the current time today based on your computer system time.

Click on the Timer control and enter the code above,  three  buttons as shown below:

The digital clock is as shown in Figure 31.1

We can create a simple stopwatch using the Timer control. Start a new project and name it stopwatch. Change the Form1 caption to Stopwatch. Insert the Timer control into the form and set its interval to 1000 which is equal to one second. Besides that, set the timer Enabled property to False so that it will not start ticking when the program is stathree buttons and change their names to BtnStart, BtnStop and BtnReset respectively. Change their text to “Start”, “Stop” and “Reset” accordingly. Now, enter the code as follows:

The Interface of the Stopwatch is as shown in Figure 31.2 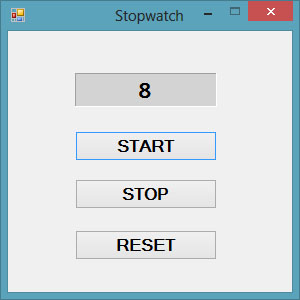 We can create a digital dice easily using the Timer Control. To create a dice, you need to generate random numbers using the Rnd function. Rnd generates numbers between 0 and 1. The following statement generates random integers from 1 to 6

In the code, we introduce the variable m to control the length of time of the rolling process. If m is more than 1000, then the rolling process will stop by setting the timer enabled property to False. Set the timer interval to 10 so that the number changes every 0.01 second.

Running the program produces a dice with fast changing numbers which stops at a certain number. The interface is as  shown in Figure 31.3